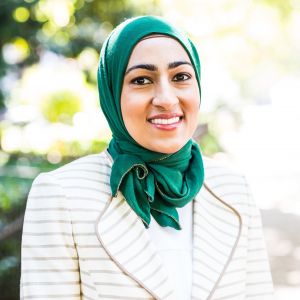 Wardah Khalid is a policy analyst, activist, career coach, and speaker on U.S. foreign policy in the Middle East, refugees/immigration, and Islam in America. She most recently worked on Capitol Hill as an APAICS Congressional Fellow on civil rights, immigration, foreign affairs, and national security issues. Wardah is the Founder and Board President of Poligon Education Fund, a national civic education and advocacy organization dedicated to strengthening Muslim American engagement with Congress.

Wardah was recognized by ABC's Nightline as one of the country's top millennial activists. Her writing and commentary has been featured in outlets including the Washington Post, CNN, The Guardian, NPR, and US News & World Report. She authored the “Young American Muslim” blog for the Houston Chronicle and hosted "Reality Check" on One Legacy Radio.

Wardah holds a Masters in International Affairs from Columbia University's School of International and Public Affairs. Additionally, Wardah is a CPA and received a BBA and MS in Accounting from Texas A&M University.