How to Effectively Engage Your Elected Officials

Communicating with Your Representative

First step: find out who represents you. While you can search by your zip code on House.gov or Senate.gov, Common Cause has a handy website where you can put in your address and find the names and contact info for all of your federal representatives.

After Election Day 2016, a former Congressional staff member to two Republican members of Congress posted a series of tweets as an instructive guide to effectively engaging with elected officials. For the most part, Emily Ellsworth’s tweets are spot-on, particularly her advice to call your member’s office instead of emailing, writing letters, or faxing. While members vary in how they approach constituent mail, phone calls are always going to be your best bet: Members receive thousands of emails and letters a week, and will often group them together for form responses. When calling, you will reach a live person – typically a staffer – who will take down your comments and tally responses for the member.
My own experience working for five years on the staff of a Democratic member of Congress began in the summer of 2009 – at the very height of the health care debate – right before the passage of the Affordable Care Act (ACA). On certain days, those opposed to the ACA would be instructed to flood Congressional office phones, and all ten staffers in our district office would be engaged with constituents, tying up phone lines and making our other daily work difficult for at least 2 hours as the phone-storm raged on.
While the phone calls did not change my boss’s mind on the ACA debate, it put our office on notice – and led to the first close race my boss had had in 10 years, with the midterm election of 2010. Phone calls to your Representative and Senators are key to making your voice heard in holding elected officials accountable to those they represent…but must be followed up with real mobilization and action leading up to your elected officials’ next election.

Call the District Office AND the DC Office

Lately, Congressional phone lines in DC offices of members have been tied up with an influx of constituent phone calls. People are often put on hold or never get through to a live person. Much of the focus of Congressional call-in campaign is on DC offices, but people forget that their members of Congress have one or more offices in the district they represent. For example, my Representative in my home state of NJ, Leonard Lance, has two offices in NJ and one in DC. I can find this information I can find at the bottom of his legislative website:

Head over to your elected official’s legislative webpage to find their offices in the area. If you know the name of your representatives, it’s fairly easy to pull up their webpages: Members in the House of Representatives have webpages that follow the rubric lastname.house.gov, and Senators’ websites can be found at lastname.senate.gov.
BONUS: There is a strict division between what Members of Congress’ legislative offices do and what their campaign offices do (federal election laws prohibit legislative offices from engaging in electioneering, and campaign offices cannot speak to legislative policy).
However, be sure to call the legislative offices (both in district and in DC), and if you have extra time, call the campaign office to let them know that if the member does not vote or speak out on issues that matter to you, s/he will not be getting your vote in the next election. If you have donated money to the campaign in the past and are not satisfied with your member’s stance, let the campaign know that you do not plan to donate again, and that you will dissuade other donors from further funding the campaign.

In order to balance their voting and legislative duties in DC, as well as their representative duties in district, most members of Congress follow a schedule of being in DC when Congress is in session (typically in DC Monday through Thursday), and heading back to their districts when voting is done for the week (typically Friday through Sunday).
But members of Congress rarely have weekends to themselves, as their schedules in-district are packed with things like constituent meetings, visiting local businesses, and attending in-district events. Many will pre-schedule and hold town hall meetings, where constituents can come and ask questions and receive updates.
MSNBC has reported that those opposing President Trump’s recent actions have been showing up to town hall and public meetings to take their members to task on supporting or abstaining on key issues, with progressive activism putting growing pressure on members – some of whom have cancelled or fled their recent public meetings as a result.
There is a handy guide being compiled in real time with the latest town hall and public meeting schedules for members of Congress around the country. Attend these meetings whenever you can and respectfully bring your issues to the attention of your member.
If your member of Congress is not included on this list, you can search their legislative website for upcoming public events, and if your member has none scheduled, you can call and urge them to hold one to address constituent concerns.

In her Twitter thread, Emily Ellsworth suggested engaging on social media was ineffective, but I disagree.
In fact, a report from the Congressional Management Foundation about how social media influences members of Congress and their staffs detail just how much weight Congressional offices give social media.
The report indicates that as few as 10 social media posts to a member of Congress is enough to catch their office’s attention. (The whole report is worth the read, though!) 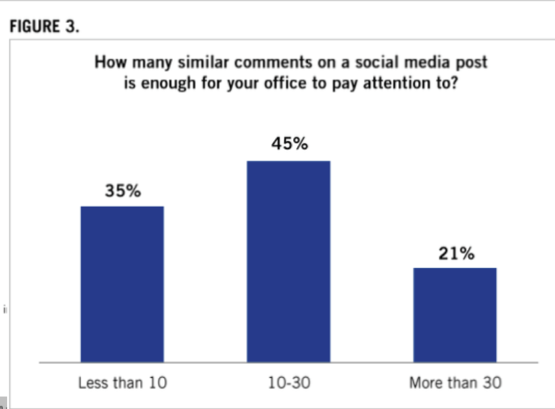 Again, social media usage varies from member to member. Some (like Sen. Cory Booker in NJ) actively and personally engage on platforms like Twitter, while others allow a staff person to run the account for them (with approval of all messaging).
In either case, staff will often remove comments that are verbally abusive or seen as harassing towards the member.
But well-thought out points made in opposition to a member can work to your advantage in two ways: 1) those who follow the member on Facebook or Twitter will see your thoughts and perhaps find persuadable arguments in them, and 2) if your comment or tweet is reasonable and it is taken down for simply disagreeing with your Representative, the move could backfire on the member (just make sure you take a screenshot of your comment or Tweet so that you have record of it).

There is nothing that members hate more than negative press, whether local or national.
Most Congressional offices will clip and save stories featuring, quoting, or mentioning the member, on either a daily or weekly basis.
Use the power of the press and write letters to the editor and/or op-eds in your local and regional papers, naming and shaming (or praising) your elected officials for the stances that they take. (Stay tuned for some of our top tips for writing letters to the editor and op-eds.)

For those crunched for time, social entrepreneurs have created some fantastic post-Election tools and resources for effective civic engagement.

How have you reached out to your legislators lately? Tweet to us @rethink_media and let us know!