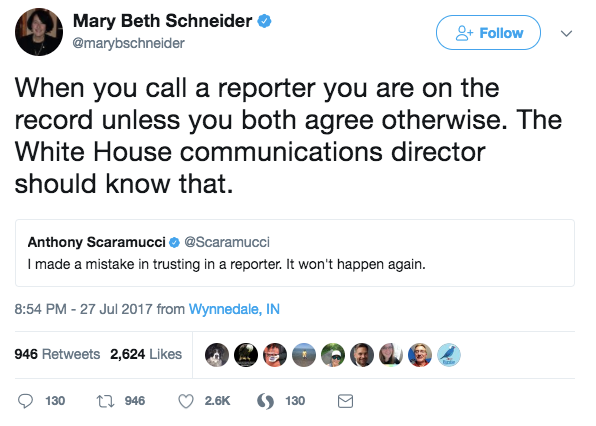 How do you reach agreement with a reporter?
We’ve culled the most common definitions for the rules of attribution to provide a general framework for negotiating agreed-upon definitions with each reporter.

This means that everything in the conversation can be used and attributed to your source by name and job title. Unless you specify otherwise and explicitly gain the prior agreement of the reporter, as reporter Mary Beth Schneider makes clear, assume that everything you say is on-the-record.
You can’t say something interesting and then suddenly declare it on background, for example. If you wish to speak, but not on the record, you must receive the reporter’s agreement first. If the reporter doesn't agree, you're still on the record.
For example:

The comments may be quoted directly, but the source may only be identified in general terms (e.g., "a government insider"). It’s up to you and the reporter to determine how precisely you will be identified. Keep in mind that even if you’re not specifically identified, it still may be obvious to the audience who the source was.
For example:

Some say it is the same as not for attribution, others believe you can't even quote it, just paraphrase the information in the story.
In any case, the information provided by a source can be used, but the source cannot be named directly.
Speaking not for attribution or on background can be helpful when you want to put pressure on a political target without potentially disrupting your working relationship with the target.
For example:

The information provided is not for publication. However, the information you provide can be used without attribution to verify its veracity with another source.
Off-the-record conversations work best in one-on-one situations.
Before you employ any of these tactics, besides speaking on the record, always bear in mind that none of these agreements are legally binding. It’s an honor code built on the trust you and each individual reporter share.
Most reporters aren’t looking to burn a source, but you still may be unwillingly named or quoted.
Use judgment and caution when working with a reporter for the first time. And ultimately, never tell a reporter anything that you absolutely don’t want to see in a story. Just ask Scaramucci.
Still confused? Contact us to discuss the nuances of attribution in more detail.

What to Include in Your Twitter Bio to Look Like an Expert
Jan 18, 2022
What Journalists Are Looking for in Your Staff Bio on the Website
Jan 18, 2022
Your New Year’s Resolutions: Communications Style
Jan 5, 2022
12 Ways to Raise Money and Build Power from Your Communications Successes
Dec 10, 2021
Twitter Spaces: A Guide for Advocacy Organizations
Nov 22, 2021
Subscribe to our blog