May 12, 2022
Struggling to find inspiration for your organization’s TikTok account? Here are some of our favorite TikTok advocacy accounts that do a great job of creating content that maximizes impact.

Struggling to find inspiration for your organization’s TikTok account? Here are some of our favorite TikTok advocacy accounts that do a great job of creating content that maximizes impact.

Robert Reich is an American professor, author, lawyer, and political commentator. His TikTok account has amassed nearly half a million followers, thanks to his knack for using humor and trends to approach difficult subjects. He keeps his videos short and concise, like this one that breaks down the debt crisis in Congress and how Republicans and Democrats approach it differently: 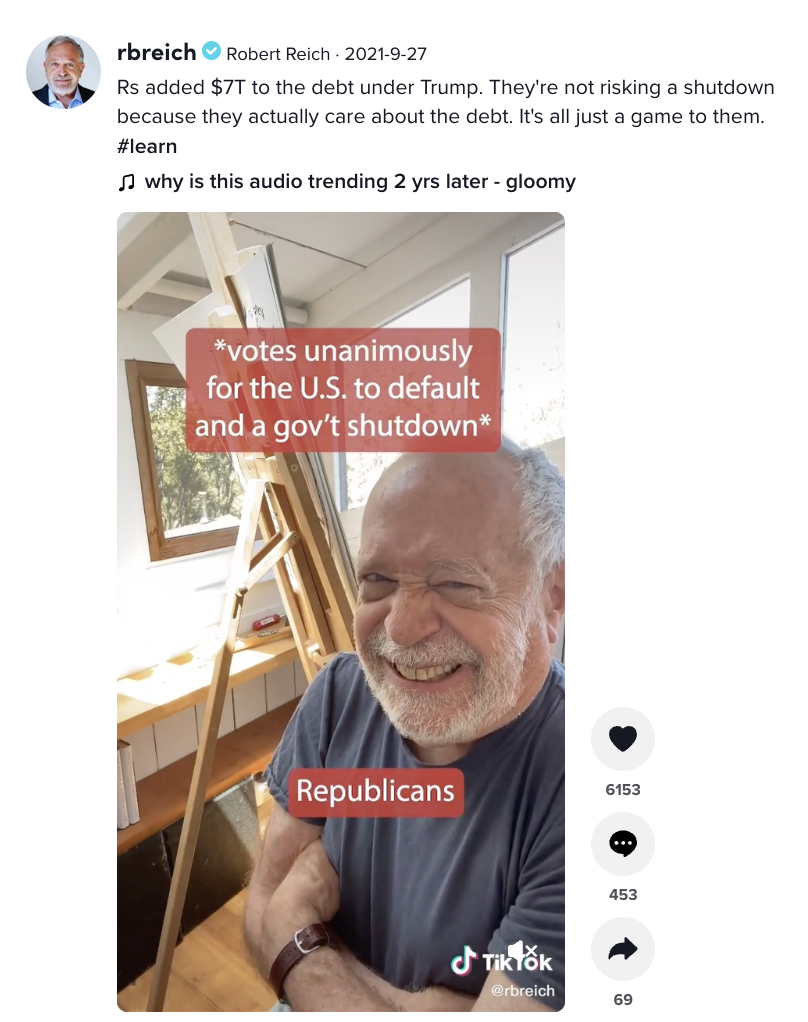 Robert has also created his own brand image on his page by consistently using text on video covers that summarize the content of each video. Using cover text that summarizes videos is a great way to engage viewers looking for specific content. 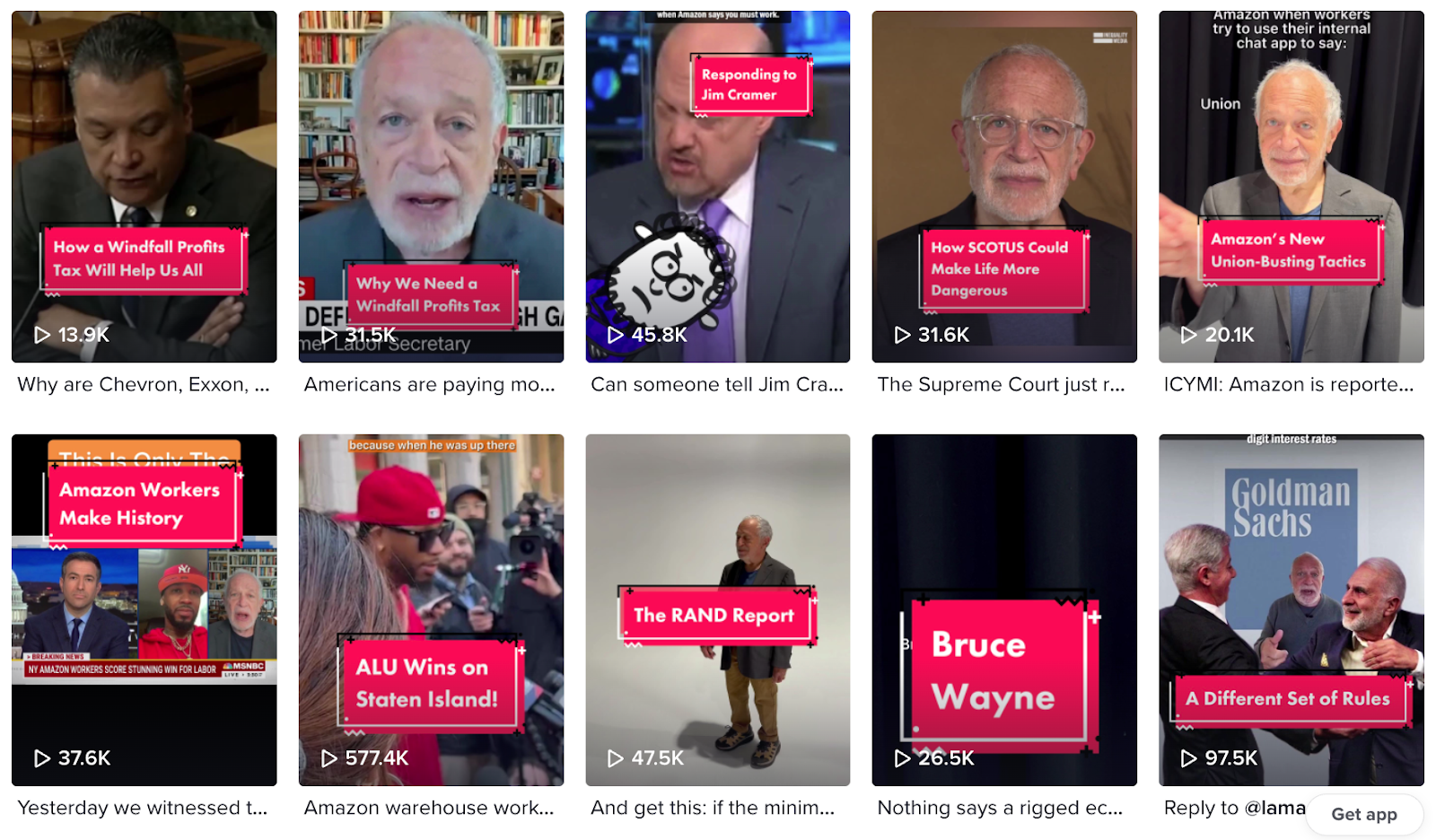 Another great TikTok advocacy account to check out is the ACLU. They do a great job of using footage from relevant testimonies and hearings around priority and legislation. Their videos clip the most engaging and heartfelt segment(s) of testimonial footage in order to get a point across quickly and concisely. For example, this one-minute TikTok pieces together the most poignant moments from a father’s testimony against a Missouri anti-trans bill. 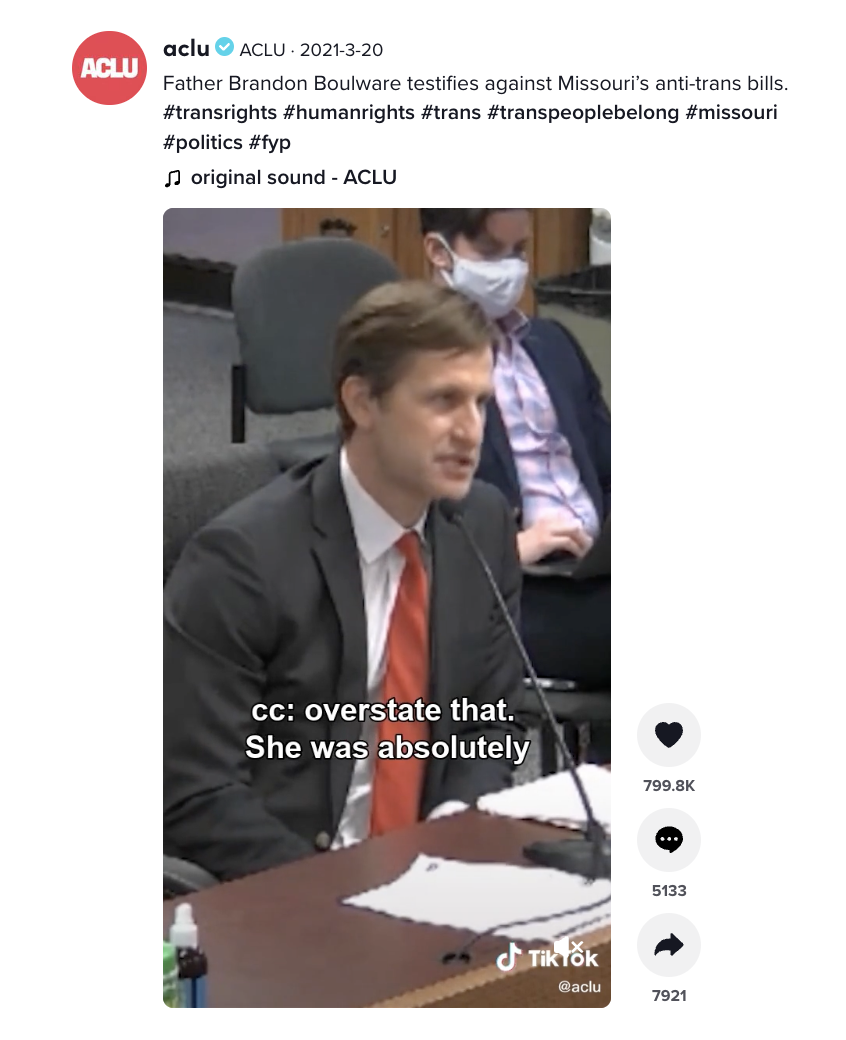 The ACLU also does a fantastic job of using TikTok’s popular effects in their videos. For example, this TikTok uses the green screen effect to provide a visual of Tennessee’s gerrymandered districts. 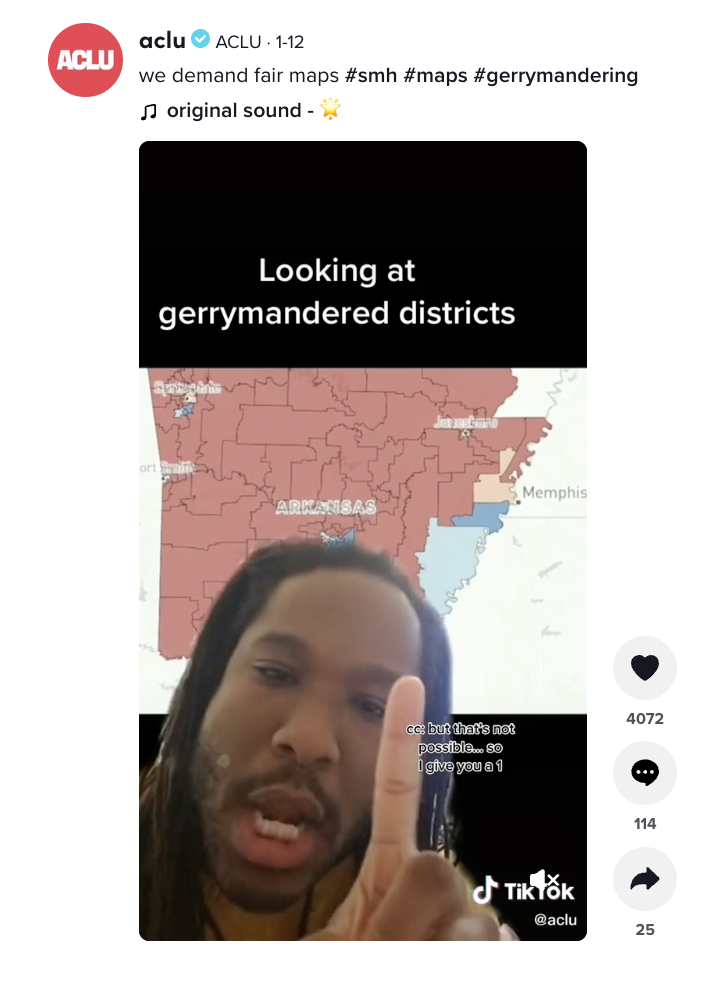 They made this TikTok even more impactful by having an on-screen person lip-sync a trending sound. This not only shows they are up-to-date on TikTok trends, but also allows them to showcase their fun personality!

The ACLU also makes their account stand out by using footage of real people from their organization leading on-the-ground advocacy work. Check out this TikTok of one of the ACLU’s lawyers at the Supreme Court defending our right to access abortion. Adding an up-beat song makes it even more captivating. 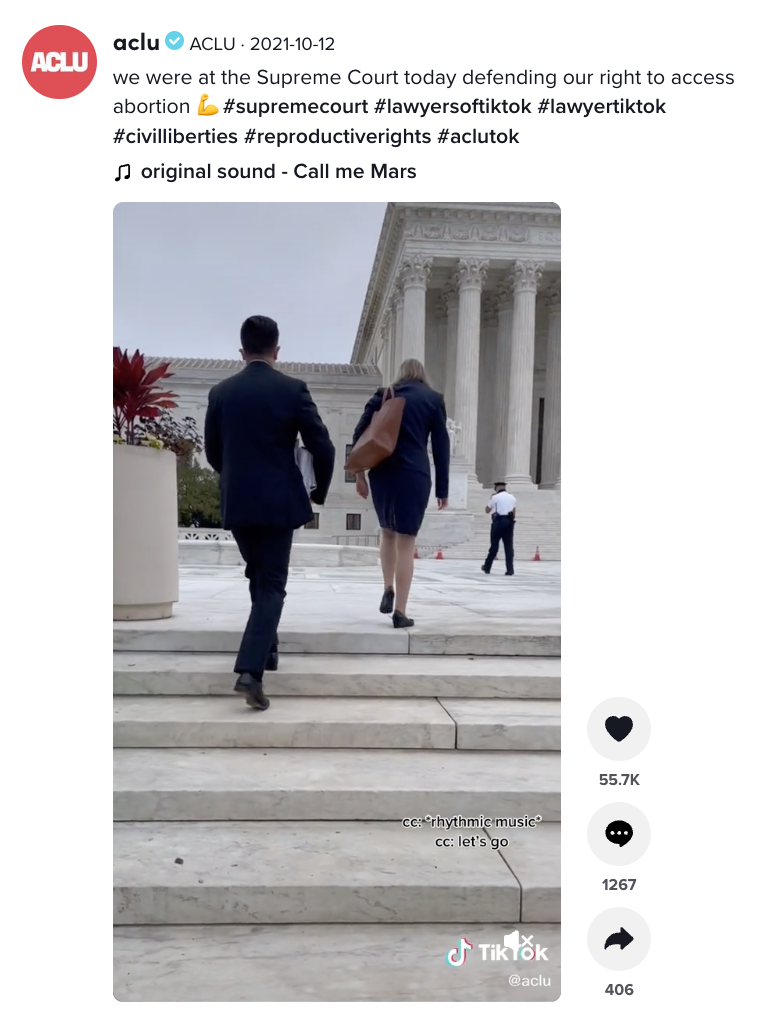 GenZ For Change was founded by a coalition of young TikTok creators looking to use their following to defeat Donald Trump and his hateful rhetoric in the 2020 Presidential Election. In the year and a half since, the account has continued to harness its collective power to galvanize hundreds of thousands of TikTok viewers to take down whistleblower tiplines, urge their representatives to pass climate legislation, and so much more. Their account is an outstanding example of youth activists using their social media know-how to make a difference.

The account did a great job of growing an initial audience base by partnering with other creators who have an established following and reposting their content with a credit tag. For example, check out this video that uses a trending effect and sound to bring a new perspective to a news story about M&Ms. 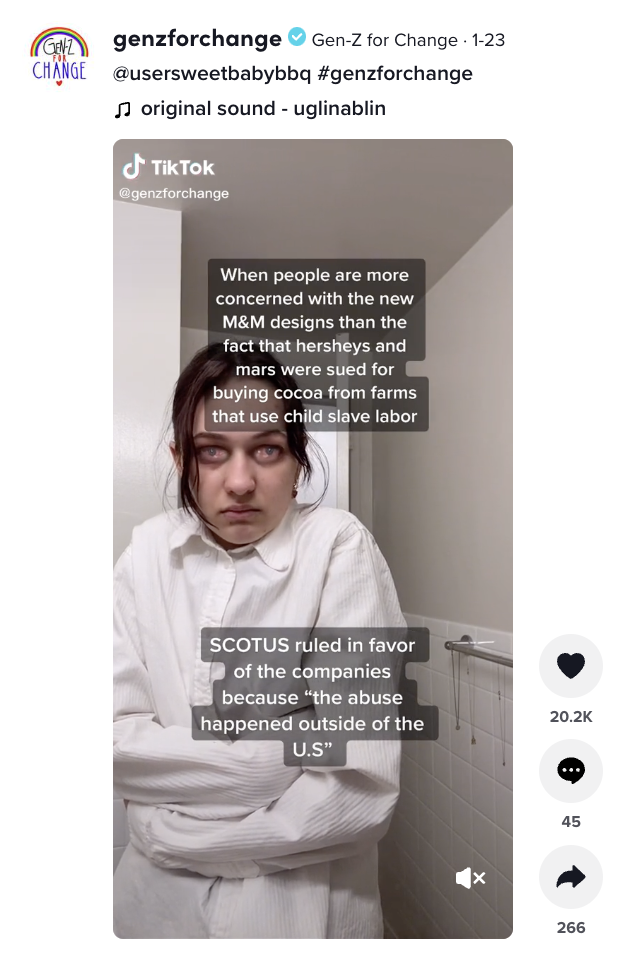 This video also demonstrates how using on-screen text can help tell a story and drive a narrative.

GenZ For Change also does a great job of showing how your organization can create an engaging series. Their popular series “Dumb Sh*t Your Politicians Did This Week” has gained a following that keeps coming back wanting more content week after week. Their share text also encourages comments, and they use an awesome emoji-fied hashtag so viewers can easily access all past series videos. 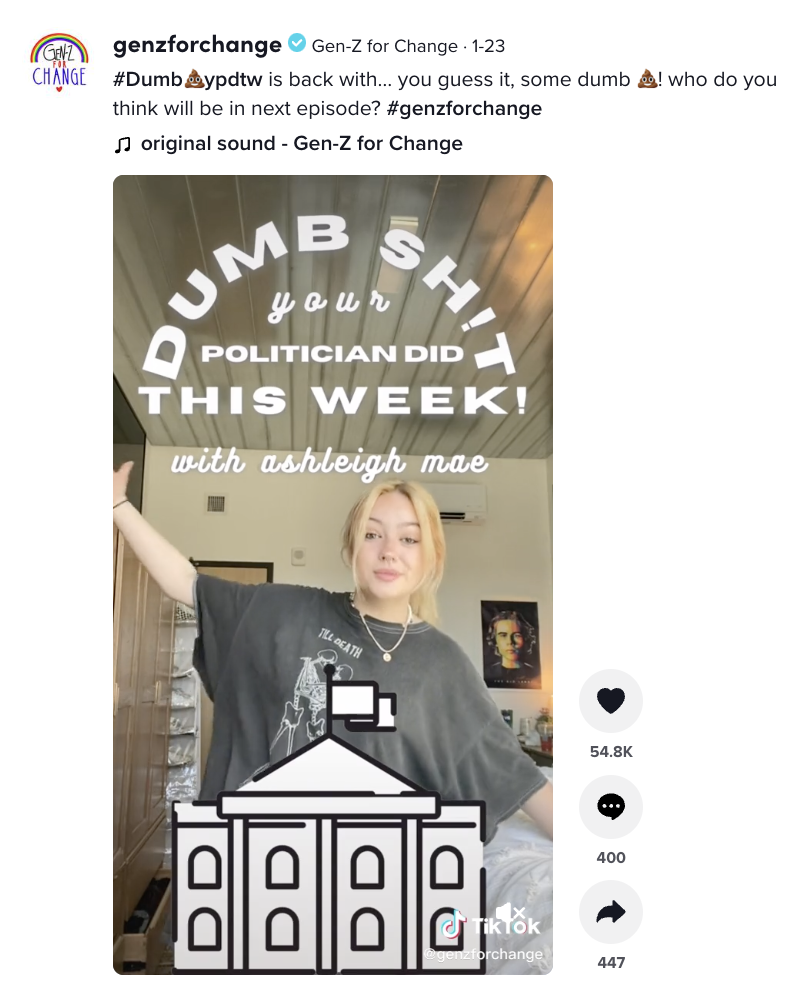 RepresentUs has garnered more than 150,000 TikTok followers by posting informative videos, many of which repurpose long-format content from YouTube. This is a great example of an organization recycling existing content to build capacity across different platforms. RepresentUs’s video on corruption in the US government has more than 1.9 million views on YouTube. They were able to reuse this successful content by splitting it into two TikTok videos—that each went viral. 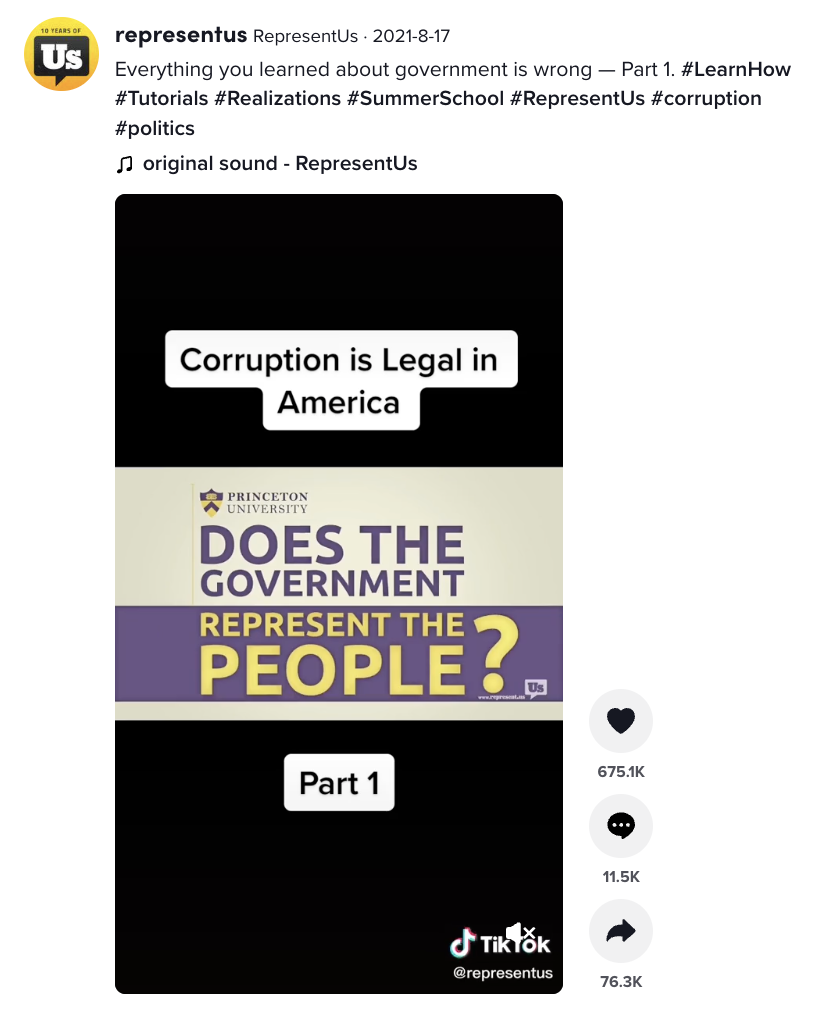 RepresentUs also uses engaging parts of video clips created by their organization in their TikTok videos. This humorous news clip shows the organization using pizza to explain the harmful impact of gerrymandering. 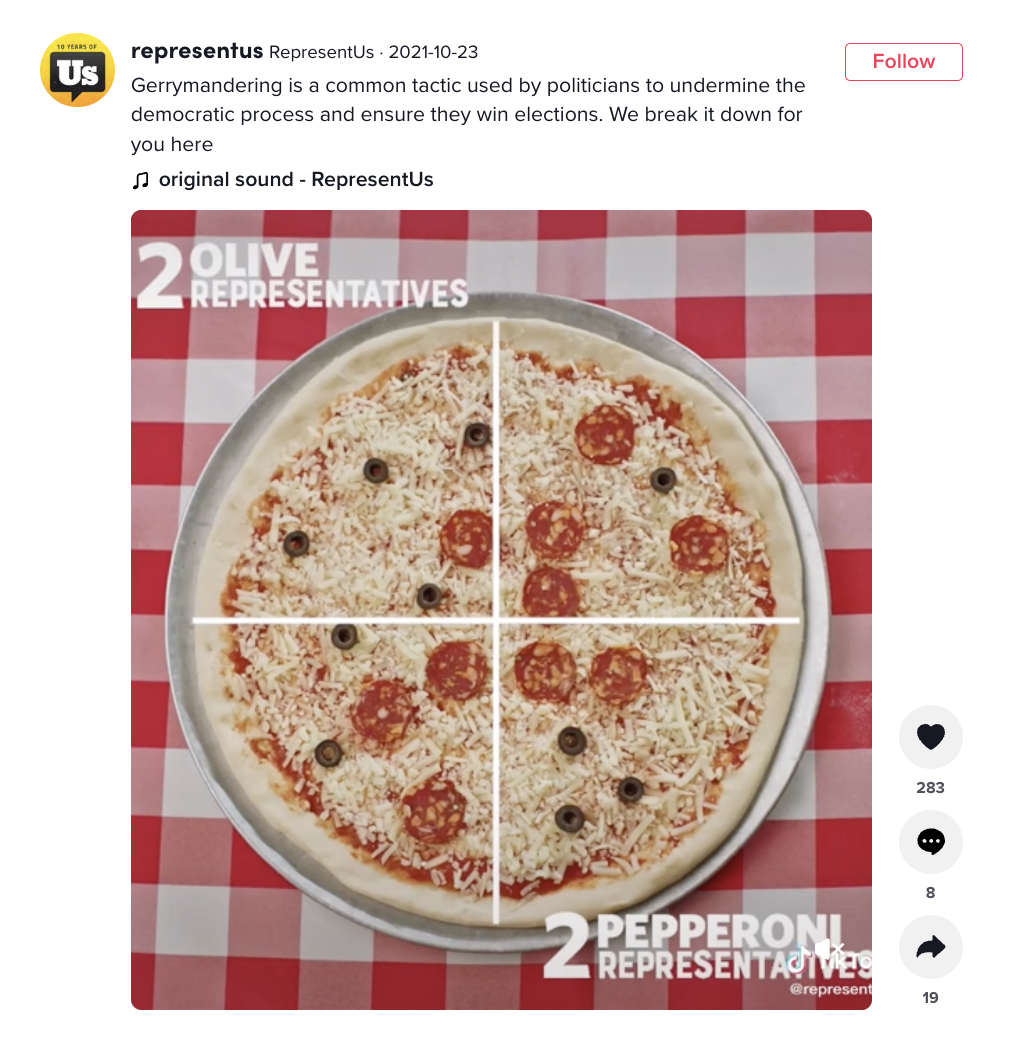 Co-founded by Malala Yousafzai, the Pakistani activist and the youngest Nobel Prize laureate, the Malala Fund is an international, non-profit organization that advocates for the education of women and girls. Despite its serious mission, the Malala Fund’s TikTok does a great job of creating and sharing funny videos in classic TikTok style. They share a variety of content about the advancement of women and girls in all aspects of life—from a 15-year-old girl standing up to the Taliban to an all-girls Afghan robotics team.

Malala also makes appearances in a lot of videos and even does a series called “Ask Malala Anything” where she responded to a variety of questions from TikTok users. This is a great way to engage viewers and make high-profile individuals more accessible to audiences. 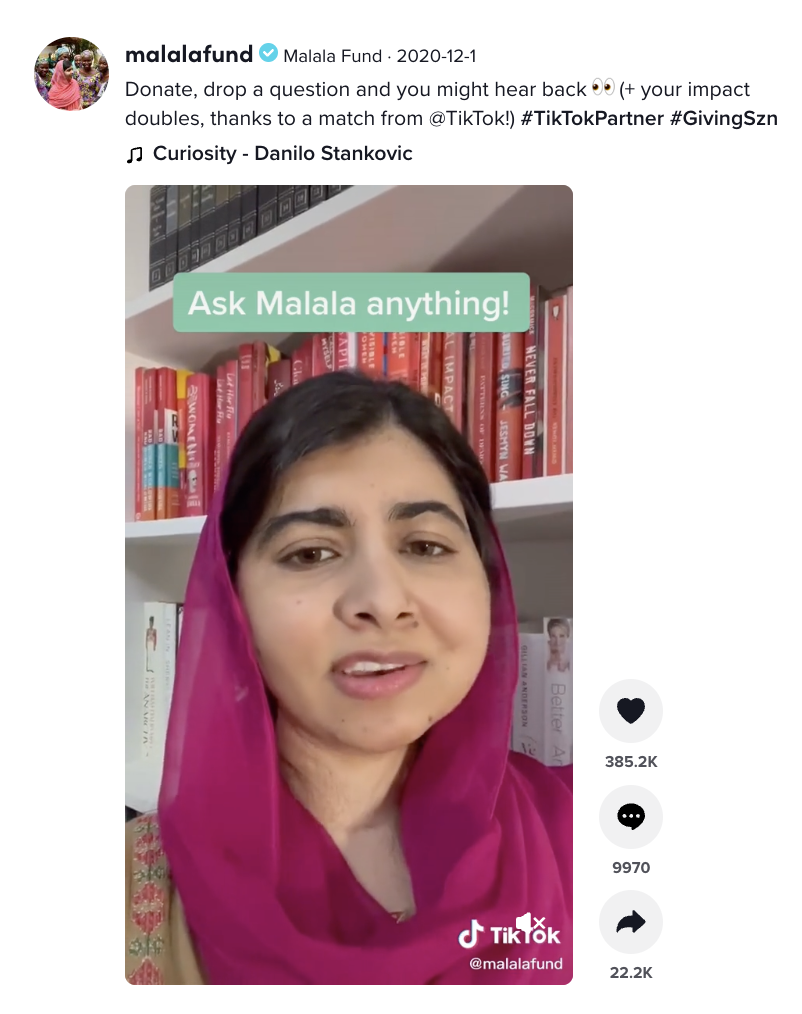 More Perfect Union was founded in 2021 and specializes in video reporting and opinion coverage about the American labor union, economic policy, and corporate accountability. Their TikTok account has gained more than 150,000in its short lifetime by posting viral content related to their core causes. Some of their most viral content is leaked footage from large corporations impeding their progress. For instance, much of their recent content has covered the fight for Starbuck workers to unionize and corporate leadership targeting union leaders. 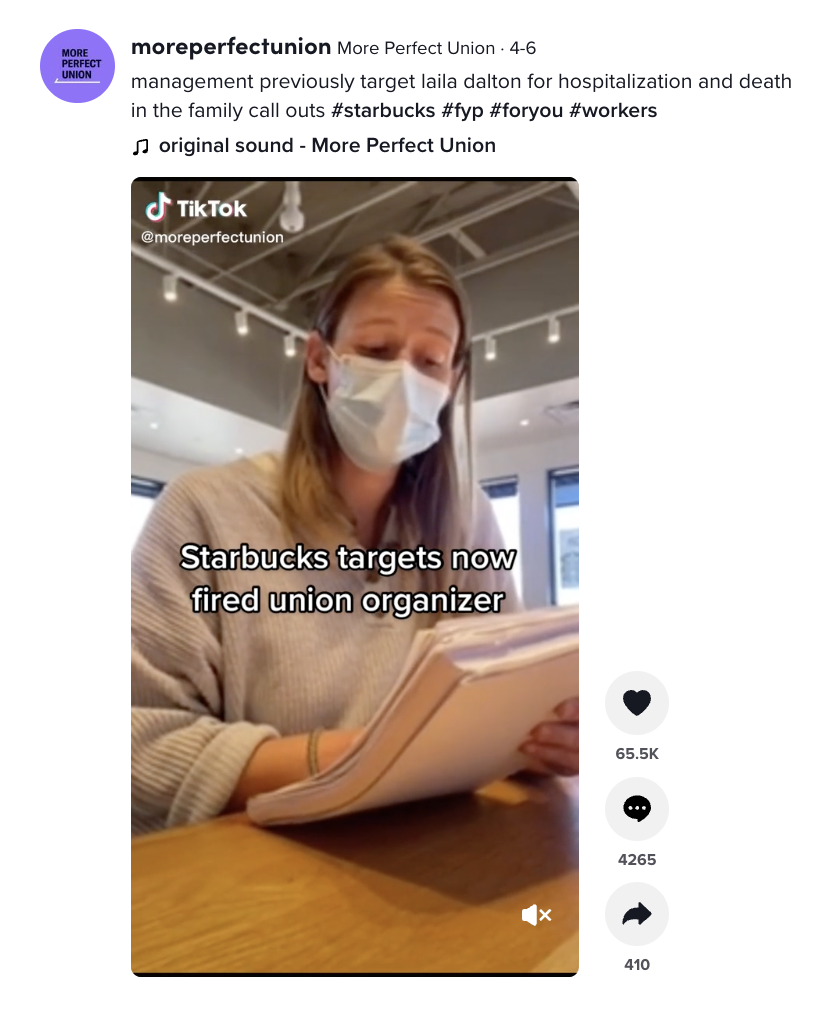 They also make sure to follow up on developing news stories and share positive outcomes. This video of Pittsburgh Starbucks workers voting unanimously for a union provides great encouragement that results are possible with hard work and dedication . 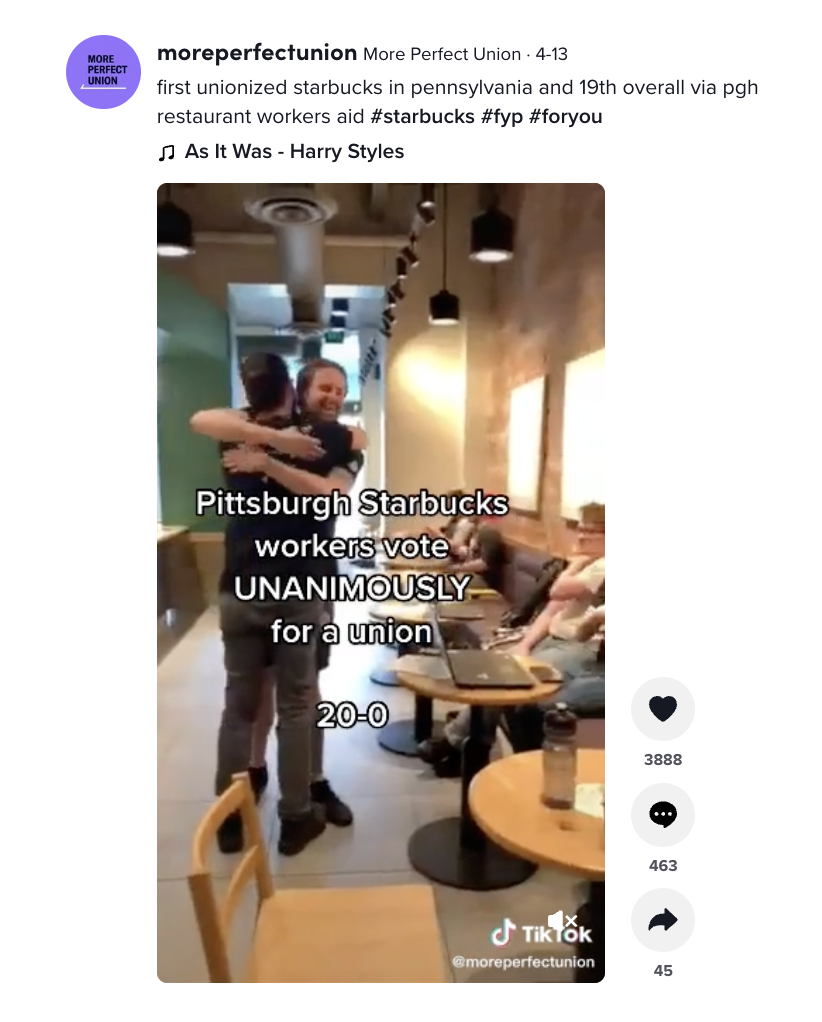 Which are your favorite advocacy-related TikTok accounts? Tweet to us @rethink_media and let us know!