Who Are You Trying to Reach?: Some Ideas for Targeting Facebook Ads

So, are you trying to find audiences that behave a lot like some of your top online donors or those most likely to sign one of your online petitions? Lookalike Audiences could be a good bet for you.
UPDATE: Of course, just as we roll out this blog post, Facebook announced a new targeting option: Values-based Lookalike Audiences. From Facebook:

With this enhancement, advertisers are no longer limited to creating small groups of audiences based on their spend or LTV (lifetime value) prior to creating a custom audience. Now they can include a value column to their entire customer list, which Facebook can use to create an additional weighted signal for people most likely to make a purchase after seeing your ad. Value-based lookalikes can be found across all objectives in Ads Manager or Business Manager.

How to Create a Lookalike Audience

For how to create a Lookalike Audience, check out Facebook’s resource here. 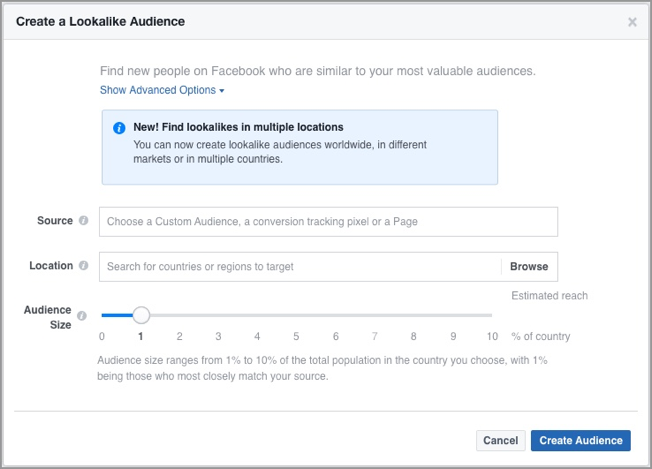 Many of the organizations that we work with have indicated that their audiences largely skew older. In order to stay relevant as these audiences continue to age, it could be strategic to start building a younger fan base for your organization.
One way to start getting your organization in front of younger generations is to target Facebook ads to them.

How to Target Younger Audiences

This part is easy. As you’re creating your new audience, just adjust the “Age” variable to the ages you’d like to include. 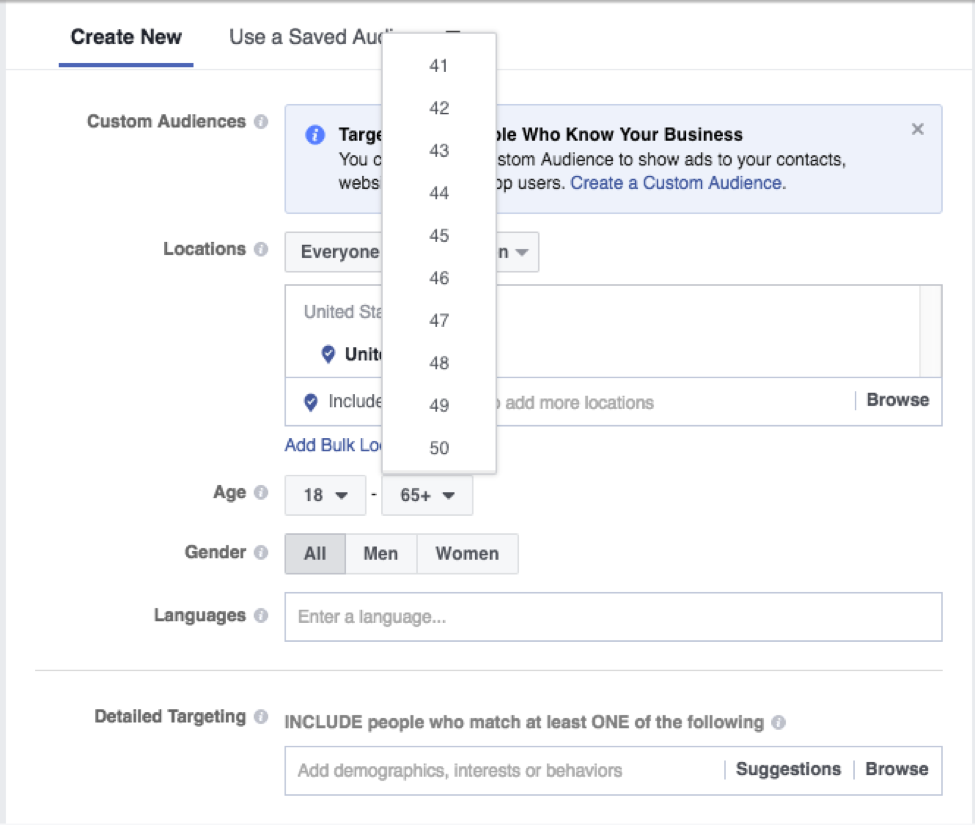 We generally start our targeting for younger audiences at age 18: voting age.
Don’t forget to frame your content in a way that will resonate with this younger audience; don’t just use the same content you’d use with your existing fan base.
Wondering what that content looks like or what will resonate most? Well, that sounds like a great A/B test to us!

Are you doing state-level work, such as a ballot initiative? Spend your money more effectively by targeting just the people who live in that state.
Are you hoping to influence a given member of Congress or lawmaker? Target his or her constituents in the state or district, encouraging them to reach out to the lawmaker. Hearing directly from his or her constituents will better convince the lawmaker than just hearing from interest groups. (Why? Re-election is at stake.)
For example, Women’s Action for New Directions targeted this ad to progressive women in Arizona, encouraging them to call Sen. John McCain (one of the targets on their whip list) and demand a Pentagon audit.
Bonus points: WAND included the phone number for Sen. McCain’s district office, which is often a good strategy to reach congressional staff, as the district office is much less inundated with requests and calls than the DC office.

How to Target Location-Specific Audiences

When you’re creating your new audience, just start typing in locations. This could include countries, states, regions, cities, postal codes, DMAs, or – wait for it – Congressional districts. 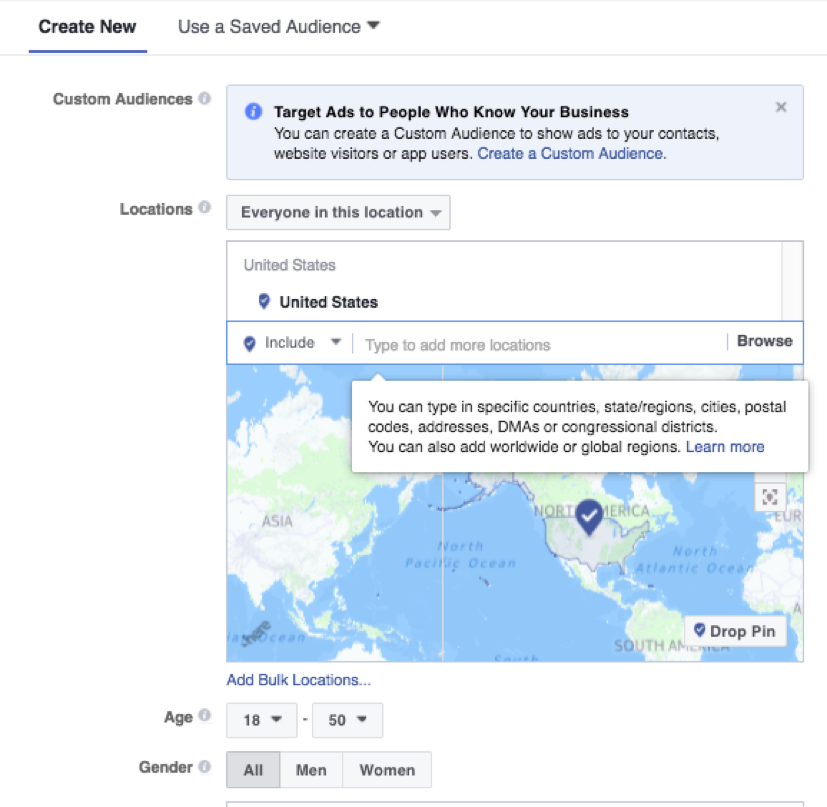 Working to influence policy, it’s no surprise that some nonprofits will want to target based on a user’s political affiliation. You can target based off of users’ self-reported political allegiances or those identified by Facebook based on user behaviors (or both!).
This could help you test how various audiences respond to a given message or whether there are messengers that are more compelling for a given political audience. For example, we have run ads with the same message to liberal, very liberal, moderate, and conservative audiences to see how they responded—and learned some fascinating things about both our base audience and our persuadables. We then used these insights to further refine our message and strategies for these audiences. Stay tuned for our upcoming blog post on A/B testing to learn more.

How to Target Politically Aligned Audiences

There are a few ways to do this (all in the “Detailed Targeting” section).

This is one of my favorite ways to target people because it involves more social psychology (and lets you tap into existing user networks).
For instance, if your ad deals with voting rights, you could consider targeting: 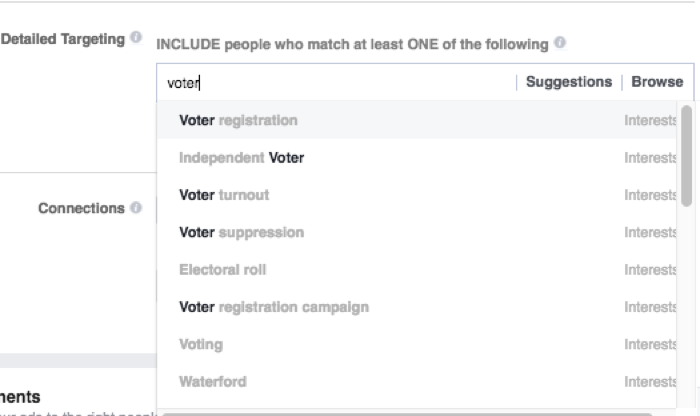 You could also target people interested in the organizations working on voting rights, including the Lawyers’ Committee for Civil Rights, Common Cause, the Advancement Project, and Rock the Vote.
In another recent campaign, we wanted to target businesses that had denounced the Muslim Ban. While creating this ad set, we decided to target employees of those businesses to see how compelled they were to share the video we had created. We just started typing the name of the company (such as Adidas or Nike), and clicked on the option that had the designation “Employers.” (We also ran an A/B test comparing the employees to those with an interest in the company, but we’ll get to that in our blog post on A/B testing.)

How to Target Audiences By Interest

Just like with the political targeting, when you’re creating your audience, scroll down to “Detailed Targeting.” From there, you can just start typing into the search box and see Facebook populate options for you. Just click on the ones you want, whether it’s an interest, employer, or other designation.

This is one of the more controversial ways to target on Facebook. Targeting by Affinity is one way to reach more diverse audiences.
Facebook has removed the option to target people by race because some unscrupulous businesses were using that option to discriminate against people based on their race. (Those businesses had narrowed their audience selection to exclude people of a given race. You can read all about that here.)
Facebook took a step in the right direction by removing this option to prevent race-based discrimination.​
What we get in its place is audience “Affinity.” Based upon a user’s activity, Facebook says that a user has an “Affinity” for a given culture or ethnicity.
So, let’s say you were hoping that your campaign could reach more African-Americans or Asian Americans. Rather than singling users out by race, you could identify behaviors that are aligned with an interest in issues affecting African-Americans or Asian Americans.

Facebook is pretty tight-lipped about what activity would designate someone as having an affinity, and it’s by no means a precise way of targeting (on purpose). But it is a step we can take to try to reach more diverse audiences with our messages.

How to Target Based on Affinities

In the “Detailed Targeting” section, start typing the type of Affinity you’d like to target. When a number of options populate, like they have above, click on the one with the “Behavior” designation. (Hover over the option for the pop-up to confirm that you are indeed searching by Affinity.)
For more on Affinities, check out Facebook’s resources here.
Of course, these are only some of the many ways to target on Facebook. And don’t feel like you have to pick one these ideas – or just one idea: You can add multiple characteristics to further refine your audience. You can add “AND” OR “NOT” designations to limit your audience, as well.
What targets have you tried or are you interested in testing for your campaigns? Tweet to us @rethink_media and let us know!

Gender Dynamics in the VP Debate … And the Strategies You Should Try as a Woman Who Communicates
Oct 8, 2020
What’s Your Media Engagement Plan for a Crisis?
Oct 2, 2020
Five Things Your Organization Can Do In Advance to Prepare for a Crisis
Sep 23, 2020
Celebrate National Voter Registration Day by Telling a Friend (or Two!)
Sep 22, 2020
How to Prepare Your Spokespeople for Rapid Response Events
Sep 17, 2020
Subscribe to our blog