Organizing a Tweetstorm to Respond to Breaking News

What Is a Tweetstorm?

A Tweetstorm is an organized flood of tweets from many users during a set time period.
The influx of traffic around a specific hashtag leverages the Twitter algorithm to get these tweets seen by many more people than any single user or organization could. (See our post on how Twitter decides what is trending.)
Note: In a previous blog post, we wrote about a different type of Tweetstorm performed by a single user. This is also useful in rapid-response settings, especially when an expert is able to further explain information about an issue as news is unfolding. But in this post, we’re talking about sector-wide efforts that can drive much more attention on Twitter to a given target.

The Role of a Tweetstorm

While Tweetstorms cannot replace the value of a sustained community tweeting around a topic or hashtag, they can be incredibly powerful tools to augment an overall strategic communications plan, especially around time-dependent events and issues or breaking news.
They can be used to draw attention and conversation around a less-covered issue, put pressure on a specific political target, or push back against a dominant narrative.
Tweetstorms are easy to organize, which makes them great for rapid-response capability.
As always, it’s imperative to understand how a Tweetstorm fits into an overall campaign strategy. Make sure that you have a clear communications goal in mind and consider a range of possible tactics before deciding to launch a Tweetstorm. Other options to consider that may fill a similar tactical role include op-ed and letter-to-the-editor writing campaigns, calls and emails to political officials, and organizing around a petition. But, of course, none of these possibilities are mutually exclusive, and often are beneficial in a combined, layered approach.

Things to consider for your Tweetstorm

Who is your target and audience?

As with any communications tactic, these two important questions need to be considered. First, the target: Which policy maker or policy makers am I aiming to impact? Second, the audience: Whom do I need to reach that has power and influence in relation to this target? The answers to these two questions should inform your decisions to all the other aspects of the tweetstorm.

When will your schedule your Tweetstorm?

We have found an hour-long period to be a good length for a Tweetstorm. We have also found scheduling between 10 a.m. and 3 p.m. (ET) to be ideal, especially if you want to involve users across multiple time zones. But choose a couple-hour window and communicate your plan to your community. Depending on your audience, you may want to schedule during work hours or after them. If your issue is international, you will need to consider an even wider range of time zones. Also consider your target and when might be most effective to reach them. You want your target to see the activity on Twitter in order to sway them.
Also to consider when it comes to timing is when the Tweetstorm will be most effective in garnering news coverage. Is it immediately as the news breaks? Tied to a particular vote or hearing? Associated with a relevant anniversary? A Tweetstorm tapping into these situations can aid in newsworthiness.

What is your hashtag?

An ideal tweetstorm uses a network of dedicated activist, staff, and supporters to get the conversation started, but takes off with a much wider reach when those people’s own personal networks on Twitter engage, as well.
For this to happen, it is important to consider a hashtag that is actionable, on-message, aspirational, and speaks to your audience. If your hashtag doesn’t feel like it could come from your audience organically, it is less likely that someone will retweet it, or add their own tweet to the Tweetstorm. To get inspiration, see what kinds of hashtags have come up organically around similar events or within your audience.

Who do you want tweeting?

This question is related to who your audience is, but is worth discussing more specifically.
When you decide on the overall goals and some of the details of your Tweetstorm, you want to make sure you have a community of people that will join you in tweeting during the event.
Depending on what you are trying to accomplish, having out-of-state people joining in a Tweetstorm might make sense, or it might cause more harm than good. (Will it look like interlopers are pushing the issue, rather than local on-the-ground organizers?)
Having experts or celebrity advocates joining your Tweetstorm is also something to consider. Do you want staff members of your organization joining the Tweetstorm or volunteers from the ground only? It’s possible that you may want anybody and everybody joining in.

Prepare – Make it as easy as possible

It’s important to keep in mind that everyone you are asking to help is also busy, so providing them all the tools they need to join in can make the Tweetstorm much more successful.
This means letting everyone know the goal of the Tweetstorm, the shared hashtag, the targets (if you want to tag them in your tweets), sample tweets, and any graphic, video, or news content that is worth disseminating.
If there are restrictions on who should and shouldn’t be tweeting, explain who and why early in the document. (For instance, is the subject matter something that a 501(c)3 organization should be wary of? Perhaps indicate that nonprofit staffers may want to participate from their personal accounts only.)
The ReThink Media team often uses Google Docs to allow us to collaborate with allied organizations who can help develop tweets. We can then use Google Drive to host any graphics that we create to share online. As the Tweetstorm develops online, be sure to update this document in real time with links to retweet any particularly impressive tweets. (See section below example for an example Tweetstorm document.)

How can you be more creative with your Tweetstorm?

There is no secret recipe to make this the most successful Tweetstorm ever.
It’s important to step back and think about how your Tweetstorm could leverage your issue, your staff or volunteer skills for a more successful outcome. For example, if you were fighting to keep a public park open, you could have everyone unite around a #SaveThisPark hashtag, but it might be more effective to get everyone to share #ThisParkMemories instead.
For another creative example, when ReThink Media’s Peace & Security Collaborative wanted to elevate some of their expert and journalist voices, they tweeted around existing hashtags on Women’s Equality Day with a lot of success.

Let people know a couple days in advance to join your Tweetstorm if possible, so they can add it to their calendars and start thinking about your goals. Groups with large constituent networks can obviously have an enormous multiplier effect.
Sending a reminder 30 minutes before the Tweetstorm begins can really help raise engagement and participation. People get distracted and have other projects competing for their attention.
One final reminder as it starts (including a link to a tweet you sent out for the Tweetstorm) is a helpful way to get people out of their inboxes and onto Twitter.

Background: After the 2016 election, the North Carolina Supreme Court and the governorship both flipped to Democratic control – but it was a close race. The General Assembly remained in Republican control. The outgoing Republican Governor called a special session to attend to the effects of Hurricane Matthew, “and any other matters.”
Advocates in North Carolina had good intel that the General Assembly would attempt to implement anti-democratic policies including an effort to pack the court with two additional judges who would be appointed by the outgoing governor. The advocates were on the ground lobbying the governor and the General Assembly, writing and placing op-eds by key influencers, organizing calls and letter-writing campaigns to state senators and representatives, and Common Cause even released a TV ad highlighting the threat.
Why a Tweetstorm: Despite weeks of an intense communications campaign, the Republican leadership in the General Assembly would not condemn the possibility of court packing. Several days before the special session was to be held, we decided that a Tweetstorm would help elevate the public pressure on Republicans in the General Assembly.
The goal was to convince Republicans that there would be a public outcry (and electoral backlash) if they attempted such a brazenly anti-democratic move. We first organized a tweetstorm with the hashtag #DontFloodTheCourt on December 12th, the day before the General Assembly was scheduled to meet. While this generated some traffic and converted some people from Twitter to sending emails and calling their state house members, we were unable to dissuade legislators from the expected court-stacking effort.
The #RespectOurVote Tweetstorm: After a fairly successful #DontFloodTheCourt Tweetstorm two days prior, we decided we needed to leverage the in-person protests going on in the General Assembly building to create a wider online conversation. We decided on “#RespectOurVote” as a hashtag to maintain partisan neutrality, highlight the anti-democratic nature of the proposal, and link to other power-grabbing issues being proposed for the session. We saw our allies in the NC NAACP use the hashtag and the community was already receptive to it. We prepared a Google doc with all the details, targets, graphics, and sample tweets. 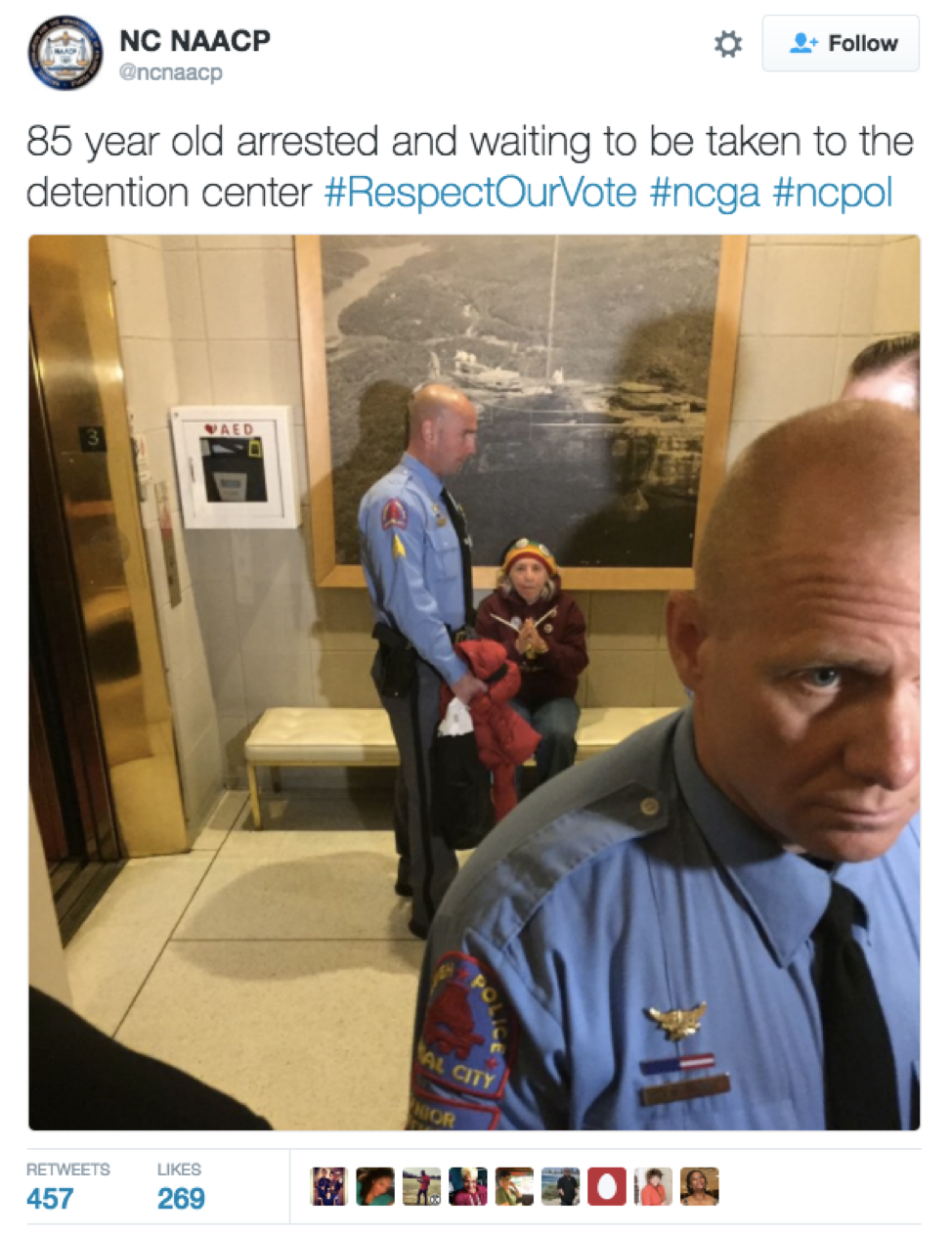 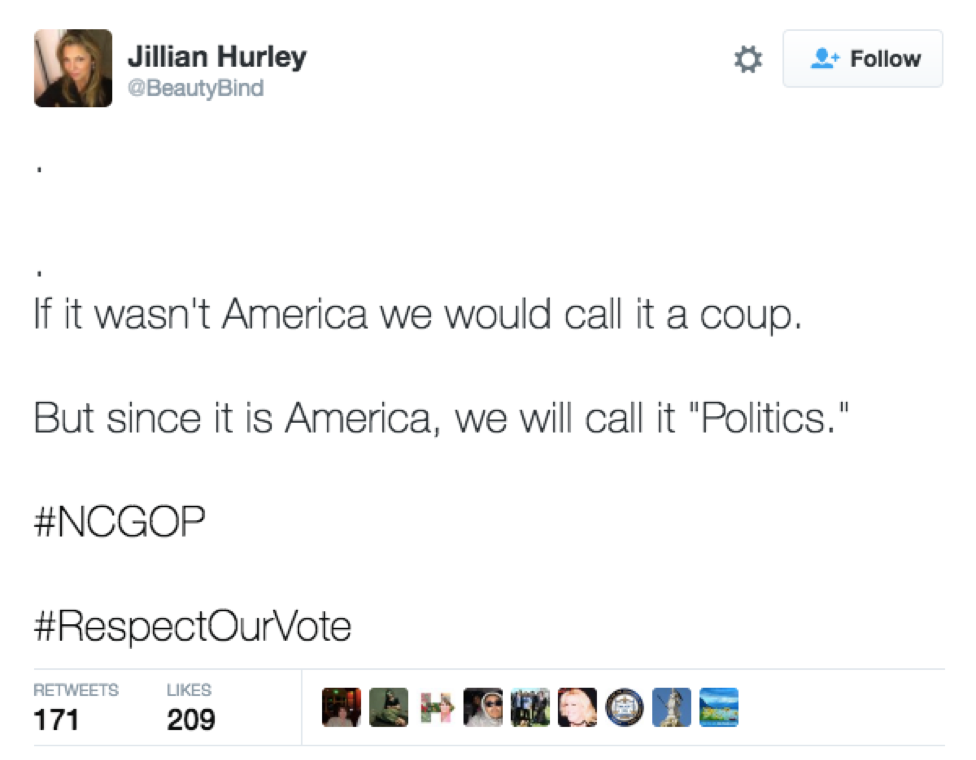 The Outcome: Since we were elevating an existing hashtag, it is difficult to parse out the precise effect of the Tweetstorm. Nevertheless, the overall volume of tweets rose significantly on the 15th, the day of our Tweetstorm. With more than 12,000 tweets or retweets sent by 5,600 users, we achieved a reach of 12.7 million estimated impressions. Though the volume of our hashtag decreased in the following days, the conversation was sustained around the hashtag throughout the special session.
Reinforcing the importance of combined strategies, the Tweetstorm was significantly elevated by on-the-ground footage (tweeted with the #RespectOurVote hashtag) of protestors being arrested in the state house.

Was it successful? Our goal was to hold the NC Republicans’ feet to the fire. Several of them responded directly on our issue, allowing us to frame the debate as “court-packing” rather than a “court expansion.” 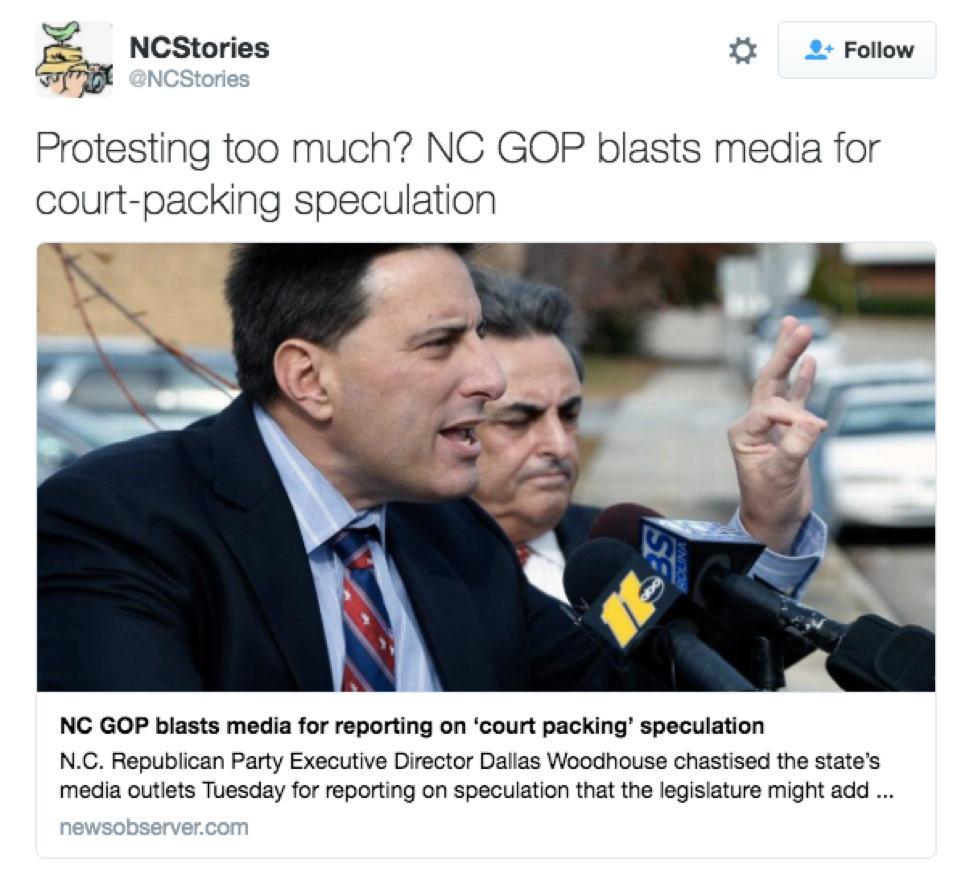 Reporters continued to ask questions to increasingly agitated North Carolina Republicans. Then, national news networks started paying attention to what was happening in North Carolina.
The day after our Tweetstorm, the House Chairman said he opposed the idea of court-packing.
In the end, the General Assembly and the outgoing governor McCrory were persuaded against trying to pack the courts (though they were able to pass a number of other partisan power-grabbing policies).
Success? We’ll take it.
What are your favorite Tweetstorms that you've seen to respond to breaking news? Tweet to us @rethink_media and let us know!